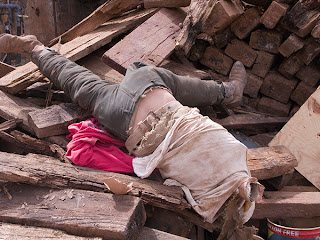 On Abraham Lincoln's birthday we crossed the border at Reynosa and McAllen, and after a week in Texas, we passed over into New Mexico and reentered the United States. During all of this time we have been traveling through border country known as "the frontera," a land more Hispanic and Indian than Anglo. It is wonderful country, for its natural beauty as well for its cultural mix and man-made wonders. We can't deny the pleasure of smooth highways and super clean, well stocked (with soap and toilet paper) bathrooms. Not that these things don't exist in Mexico. We are finding them more and more often, especially in the newer Pemex gasoline stations: but you can't count on them. When we pull into a park or campground in Mexico, Angie designates herself as "the bathroom patrol," taking it upon herself to make sure that the facilities are adequately clean and functional.

Today we are poised on the brink of a defunct open pit copper mine in Bisbee, Arizona. You can't believe the impact that seeing this for the first time has on you. It's a mix of the kind of awe one has upon first viewing the Grand Canyon (or the Barrancas de Cobre or Chiricahua Nat'l Monument--see below), and the horror of witnessing the destruction we have wreaked on the environment, all the while knowing that it is our need for and dependence on the earth's resources that has caused this destruction. 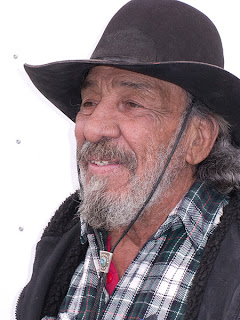 Bisbee itself is a fascinating town full of artists, colorful people and colorful buildings. We met Allberto Lucero, who calls himself a llanero, part hispanic and part indio, in a parking lot where he was working as an attendant. In his lifetime he has been a soldier (a Viet Nam vet) cowboy, actor, story teller and now author of a book of stories his greargrandmother, who lived to be 102, told him.

We missed a bit of border country drama this morning. On the highway below where we are camped, a white car forced a van off the road. Soon the van was hemmed in by white and green SUV's, the vehicle used by the border patrol, and there were a dozen or so Mexicans sitting along the edge of the road, waiting to be hauled away--victims of a failed attempt to reach the promised land (or as Willie Nelson sings, "the broken promise land.")

One of our favorite spots here was the town of Truth or Consequences, just because it is so quirky. T or C is little more than a village with two main streets, actually one making a loop, about six blocks long. It was originally called Geronimo Springs but changed its name to satisfy the producder of a radio quiz show about 58 years ago. Well, you'd think a in a town named after a quiz show people would have some answers, but when we asked directions (trying to find an artists' party we had heard about), nobody seemed to know the names of the streets or the location of one of the biggest and most colorful (purple) buildings in town. We found the party, the annual meeting of the local artists' association, and met a lot of interesting people. We concluded that there are two kinds of people--poles apart--in T or C: artists, intellectuals, and bohemian types on one hand, and on the other, people who had just filtered down out of the mountains where they's been holed up for about a hundred years. We camped in a low end trailer park (Angie vetoes the term tr***** tr***) for $16, which included a soak in the naturral hot springs baths and enjoyed it so much that we stayed a second night. But this time, because the winds were so strong that we were afraid to put the top up on La Gitana, we stayed in the Charles Motel and Spa, which also included hot tubs, all for $37. 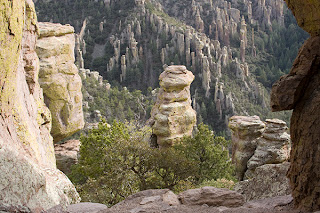 We could easily spend months exploring the natural wonders of this little section of New Mexico and Arizona, weeks on any one of them. Maybe the most astounding to us were the rock formations and grottoes of Chiricahua National Monument, partly because in this little chain of mountains between two deserts they were so unexpected. We hiked until we were exhausted, shooting endlessly, knowing that in no photo would we be able to capture the impression this rugged and beautiful land was having on us.

After seeing Patagonia and Arivaca, we plan to check out two of the other wonders of this part of the world, Las Vegas and the Grand Canyon, before heading for Ann Arbor. Hope you are all well and those of you in the northland have been able to dig out from under the latest snowfall.

Oh, the picture at the top? A castoff mannequin from the Queen Copper Mine tour. 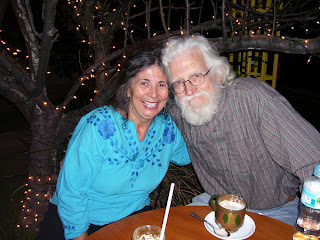