Falling in Love again with Oaxaca 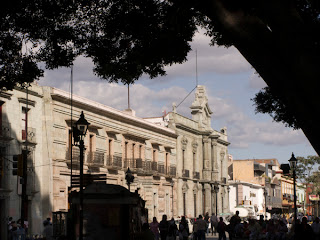 If you read our report from Oaxaca two years ago, you know how disappointed we were with the changes that were being made in the city. But most important you'll remember that the three Triqui girls that we were helping to go to school had, because of the terrible economic conditions here, dropped school and gone to Mexico City with their family to try to eke out an existance there. Well, they're back! Our first day in the Zocalo, Catalina, the mother, and Angela Flor, the youngest (and our godchild) "discovered" us, Angela Flor, happily shouting "Padrino, Madrina!" 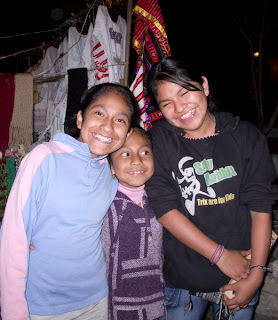 We were just as happy to see her as she was to see us, and especially when we learned that she and her older sister Chela were back in school. Meli Erika, the oldest at 14, didn't feel comfortable starting the fifth grade again, but may go to summer school to catch up.

We're getting used to the changes here. The Zocalo, or main plaza, which was ripped up and totally remodeled two years ago, is still one of the prettiest, if not the prettiest, in Mexico, surrounded by cafes where you can sit with a cafecita or a beer and watch the world go by. Cosmetically and hygenically it is improved, though there are some bizarre touches, like the fact that the all of the garden areas, and there are many, are planted with poinsettias in pots. They are pretty, but there are so many beautiful flowering plants in Mexico, that a little variety would be nice. Why pots? Because in a month or so, the will all be pulled, and something else will be planted in their place. All of this would be great, except that we know that what Oaxaca needs more than anything else is a new water system, and also that all of the money that is currently going into beautifying the city is ending up in the pockets of the governor's family and friends. The PRI party, which was ousted nationally when Vincente Fox was elected, still has its grip on Oaxaca, which is what all the ruckus was about in 2006. Unfortunately there is still fear and discontent among the locals here, although the scene is very quiet as far as tourists are concerned. 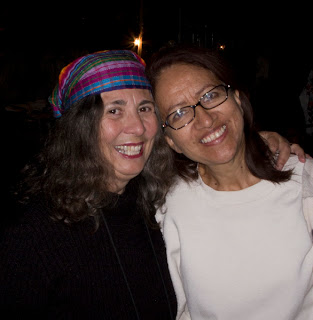 We've been been haveing a great time connecting up with all of our friends here. Lulu, the singer whom we met at Tres Patios with Memo the piano player 10 years ago, Memo, Pablo, the guitar player pictured in our "La Gente" gallery with Miguel SanPierre, the saxophonist at "El Sol y La Luna." Unfortunately these two jazz clubs don't exist any longer, but we did get to hear Pablo and Miguel in a quartet at a house party.

One of the friends that we admire most here is Andres, the stepgrandfather of our three "ahijadas." The whole family came to Oaxaca after they were driven off their lands in the mountains in a dispute that the government fomented because the land was valuable for coffee plantations. The father of Luis, who is the father of the three girls was shot and killed when he was two. Luis's mother married Andres, who was also shot twice in the back. So Andres is in a wheel chair. But by selling newspapers on the street, then selling merchandise wherever he could, he's managed to acquire a decent house for himself, as well as some property in the barrios on the side of Monte Alban. These would be considered in the slums by any standard, but for Andres, owning them is quite an accomplishment. Fortunately for them, Luis, Catalina, and the children share the house in town with Andres and Marcelina. Andres is one of the cheeriest people we know. He loves to play his guitar (his playing is about two steps above Shakey Jake's), and to practice his English with us. . (English is his third language, after Triqui and Spanish.) His dream has been to drive a car, and this past year he was able to buy one with hand controls. He says "Everyday I wake up and see the sun I thank God to be alive." We try to practice the same attitude! 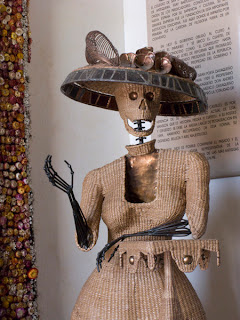 Love to all from the Fotogypsies!
Posted by Fotogypsies at 11:20 AM No comments: