I've been carrying the first one and a half lines of this poem in my head for decades!  Then, when Angie and I were on our sailboat Escapade in the mid Eighties, we had an experience that began to add life to them. We were motoring down the intra-coastal waterway past Marine World when we saw two porpoises making a streak in the water past us.  We fantasized that they were making their break for freedom.  The idea continued to percolate and finally came together as a poem while we were traveling in Newfoundland a couple of summers ago.

For all in tents
and porpoises and whales
kept captive for our delight
I apologize.
Nor do I think it right
to discriminate
against beasts of the field,
although there may be some debate
about the food we eat--
I love my meat.
But it makes me sad
to see hogs and cattle
stuffed into pens like sausages.
I would rather we take
just what we need
from all the gods have given--
that would be heaven!
We have grown too many,
but at the least
I will take my pleasure
from seeing the beasts
where they freely roam
in their native home--
or not at all.

Jim George
Posted by Fotogypsies at 9:21 AM No comments: 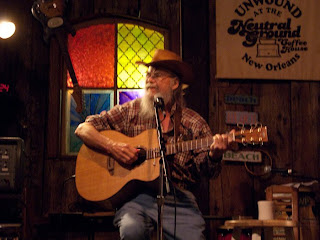 Last night we met our friend Walter Craft, who has most recently been living in Wisconsin, and who for the last 50 years or so has been touring the country as a singer/guitar player.  Walter, who started his musical career while living in New Orleans and is now in the  process of moving back, introduced us to parts of New Orleans we might not have seen otherwise.  When people not from this area think New Orleans, they usually think the French Quarter, and perhaps the Superdrome, and not much beyond that (well, since Katrina, probably the 9th ward, too).  Walter directed us to the area around Frenchman Street, just across Esplanade from The French Quarter, where the artists and alternative types have been hanging out since rents in the Quarter became prohibitive.  We ate and listened to some acoustic country, blues, and rock-a-billy music at a bar way out in the Plantation district, and ended up in this little co-op coffee shop, The Neutral Ground, in the Garden District.  Thanks, Walter, for showing us that there is more to New Orleans than meets the eye of the tourist. 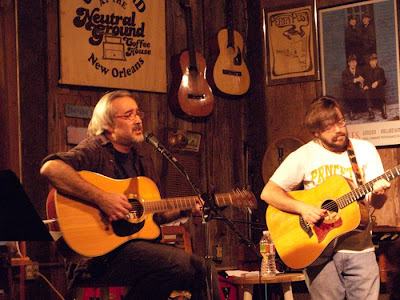 Epilogue:  When Jim was in New Orleans as a teenager, he was going to stay there, and he had a job lined up as a short order cook. But as he was sitting in the Paddock Lounge listening to music, he met someone from his hometown who had just driven a moving van load of furniture down. (The name on the furniture van happened to be B. F. George--no relation).  He offered Jim a ride back to Muskegon if Jim would help him on the van.  Jim accepted, went home to finish high school, and so the story went on.  It's interesting to think what seem like little decisions at the time can affect the course of a life, and to imagine what the alternatives might have been like.
Posted by Fotogypsies at 5:23 AM No comments:

Back to New Orleans 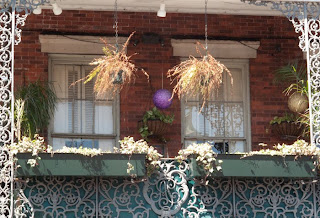 We both love New Orleans.  Jim's fascination with the city started when he hitchhiked down here in the summer before his senior year in high school.  (That was 57 years ago!)  The adventure started when he'd lie in bed at night in Muskegon, Michigan, listening to to the clear channel broadcast of a traditional jazz show. (For those of you too young to remember clear channel radio--and I'd guess that's just about all of you--before FM radio, only a few AM channels were authorized to broadcast at night.  These channels could be heard all across the country when atmospheric conditions were right.) The program host was a man named Richard Allen, who must have been in his twenties at the time. Richard was a jazz aficionado who later became a musicologist at Tulane University, famous enough to have his obituary in the New York Times when he died at the age of 80 a year or so ago.  Anyway, Jim wrote Richard and asked him if they were still playing music like that in New Orleans. Richard wrote back saying they were, and invited Jim to look him up if he ever got to New Orleans. 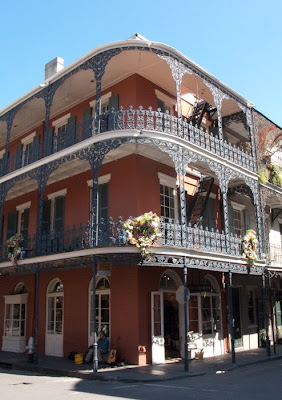 That was enough for Jim, whose first record album had been Louis Armstrong and the Hot Fives and Hot Sevens from the 1920's.  As soon as summer vacation came, he packed a heavy trunk (this was in the days before backpacking around the world became popular) and  with seventy bucks in his pocket  hit the highway with his thumb out.  After some delays, which included a stint as a short order cook in Henderson, Kentucky, where his older brother Bob was stationed doing his basic training, he finally arrived in New Orleans.  He found a room in the old Warehouse district across Canal Street from the French Quarter for a buck a night.  This was about a block over from La Quinta where we are staying now. In that day, there really were warehouses here. To reach the room he stayed in, Jim had to climb a rickety stairway and go along a boardwalk outside one building to another warehouse that had been divided into 10 x 10 rooms without windows, fans, or locks on the doors, where he stayed while he was in the Crescent City.  I hate to think what would have happened to Jim if there'd been a fire in the building.

As soon as he could, Jim went to find Richard, who lived in the corner apartment on the top floor of this building on the corner of Royal and St. Peter Street in the quarter, right down the street from where Preservation Hall is today.  Richard's apartment was filled with piles of old 78 rpm records, so many that you had to make your way through narrow paths to the only furniture in the room not covered with records, an old iron bed.  Richard knew all of the jazz musicians in town and told Jim where he could hear them. These included Johnny St. Cyr and Paul Barbarin, both of whom had recorded with Armstrong in the 20's and 30's, plus a bunch of other great old timers like Billy and DeDe Pierce, Armand Hug, George Lewis, Jim Robinson, Sharkey Bonano, and a slew of others whose names he has forgotten. He saw his first New Orleans Street parade put on by the Jolly Bunch Social and Pleasure Club and led by Oscar "Papa" Celestin's Olympic Jazz Band. Louis Armstrong was said to have played in that band with "Papa" Celestin before he left New Orleans. 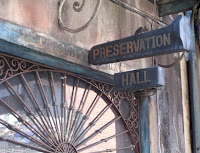 Today the generations following in the footsteps of these great musicians carry on the tradition in Preservation Hall, but in the 50's there were several clubs along Bourbon Street where you could hear really fine traditional music.  333 Bourbon Street, The Famous Door, and especially the Paddock Lounge all featured great bands.  Jim remembers sitting at the bar in the Paddock, shaped like a horseshoe with the band sitting on a stage in the middle of the shoe, listening to  "Just a Closer Walk with Thee,"  an attractive woman who Jim is pretty sure was a prostitute standing behind him listening to the music with rapt attention. We heard  the same music last night at Preservation Hall, with a band that included Charlie Gabriel, lately of Detroit but the fourth generation in a family of New Orleans musicians. 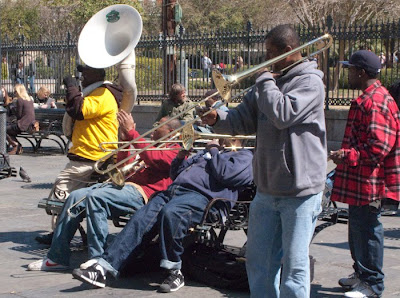 Today the bars on Bourbon Street are pretty much bad blues, rock, and karaoke. (The biggest change in the French Quarter that Jim sees is the degeneration of Bourbon Street.  Otherwise, the Vieux Carré still has pretty much the same flavor as it did 57 years ago.) But you can still hear some pretty good, very spirited music on the streets, like this group playing near Jackson Square in front of the Cathedral.
These guys, laid back as they look, were so good that even other musicians stopped to listen. 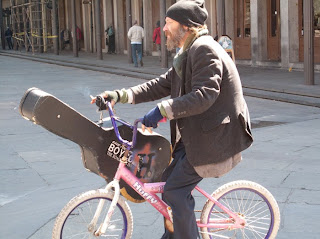 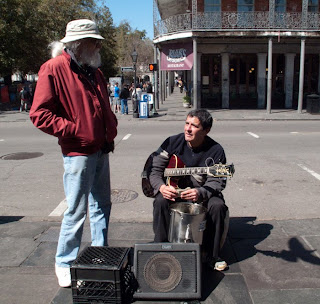 In front of the Cafe du Monde, an outdoor Cafe down by the riverfront that dates back to the 18th century, we got to talking to Nick Molina, another street musician. Forty-nine years old, Nick is a native of New Orleans. We enjoyed his style of guitar playing, which included stride piano type arrangements of Beatles tunes and other popular music of the 60's and 70's. When we complimented him, he was glad to take a break and talk, and we enjoyed the conversation as much for the chance to listen to his thick New Orleans accent, which to us sounded a little like a mix of Southern and New England, as for his delightful comments on the traditions of the city. Nick is a big sports fan, and he had plenty to say about the Saints' recent win in the Superbowl. The parades and celebrations had begun a week before the big game.  It seems that an announcer for the Saints (a former football star whose name I'm sure you would recognize if we could remember it) had said that if the Saints ever made it into the playoffs, something they hadn't been able to do in 43 years, he would march through the quarter in a dress. He died before they made it, but in his honor, Nick said it seemed like the whole town turned out in dresses for a big parade that was bigger than Mardi Gras. 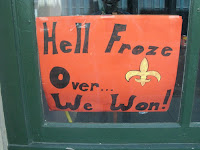 The whole town still seems pretty excited about the win, but Nick was a little nostalgic about it all.  "It'll never be the same, now that they've done it," he said. "We all hoped for so long, but once you've made it to the top, there's nowhere else to go." I guess there's a caution there about getting what you long for. 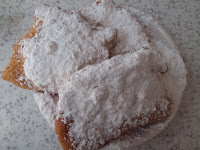 The big attraction at Cafe du Monde, aside from just being there, is the café au lait accompanied by beignets, the French holeless donuts smothered in powdered sugar. Jim remembers sitting in the cafe as a teenager, drinking his chicory enhanced coffee on a sweltering August day with the overhead fans offering a little relief, wondering what the white stuff was that he had to keep brushing off his clothes.  Then he realized that he was getting snowed on every time a waiter walked by with his tray held high, delivering beignets to some customer.


The St. Louis Cemetery I 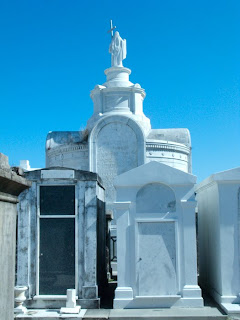 Of course, New Orleans is famous for it's above ground cemeteries, like this one, where part of the movie Easy Rider was filmed, and where Marie Leveau, the voodoo queen is believed to be buried. 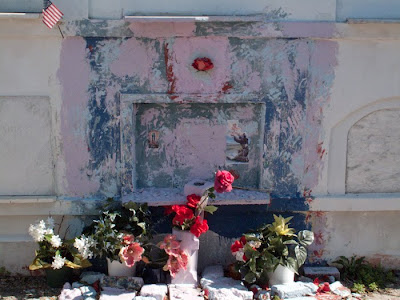 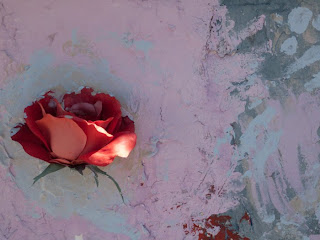 The rules are strict about defacing the graves in any way, but somehow someone connected with this one manages to decorate it to his or her taste. An attendant told us that the management often whitewashes this tomb, but it's not long before it returns to this state.  Jim says that Angie can manage to find art just about anywhere, and thinks that this photo proves it. 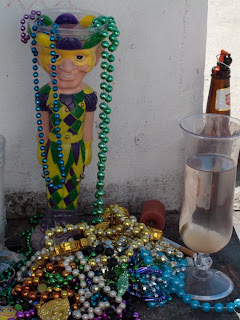 These are gifts for Marie Leveau left at what is believed to be her tomb. 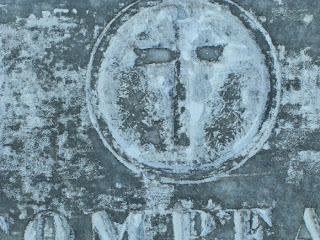 Jim liked this detail on one of the grave markers. 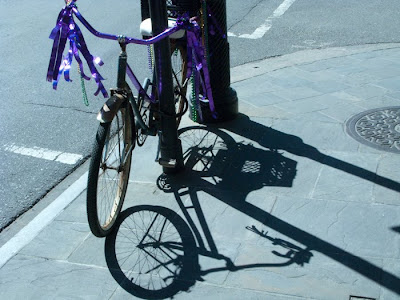 
That's all for now from the fotogypsies. Stay warm!
Posted by Fotogypsies at 3:40 PM No comments: