ANAYELLI and SOFIA in Maruata, playing in a large clay jar that their mother had made. 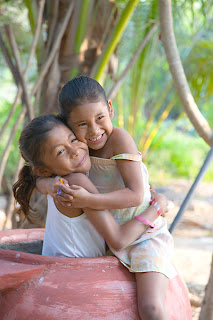 IN PURSUIT OF THE MONARCHS


We had driven up, up, up over a stone and brick road for 12 miles. Now we were in a large field that serves as a parking lot, facing a steep path lined with wood stalls where women were cooking or arranging souvenirs and memorabilia. As we started up the path, lugging along camera packs and a tripod, an Indian woman with a large bundle of bamboos sticks about four feet long stopped us. "Buy a walking stick," she said. "You'll need it before you reach the top." We were skeptical, but handed over two ten peso coins (about two dollars) and took the sticks. After making it through the rows of booths that traversed the mountain side for about a half mile, slightly out of breath, we reached the entry to the sanctuary, where we paid 35 pesos a piece for entry and were assigned our guide, Jose, a nineteen year old boy. "It's two kilometers from here," he told us, and set off up a series of concrete stairs, broken every dozen or so steps by a rocky path. We were huffing from the altitude and the steepness, so that Jose had to stop often to wait for us. Not too far along, Jim asked him for help carrying the tripod, which he cheerfully agreed to do. After about a half hour climbing the stairs, all 650 of them, Jose turned to us and said, ''This is half way." We could see why the stairs stopped there. From then on the trail was narrow, twisting, and steep. Further on we reached a beautiful open flat spot called the llano de conejos (plain of the rabbits). It was great to catch our breath before we trudged on. Here we started seeing a few Monarchs. Jose pointed out a spot just off the trail where there was a spring. Butterflies carpeted the ground there drinking the water. 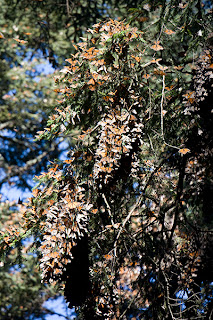 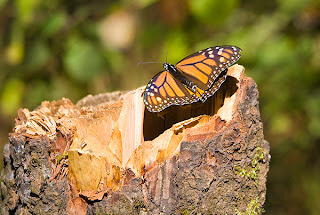 We finally made it to the end of the trail, where an area was marked off so that we and other pilgrims could watch the butterflies without doing them too much harm. The monarchs looked like leaves on the surrounding trees, until the sun warms them enough so that the can descend. Soon, with the sun shining through the tall trees, they were fluttering all around us and sometimes landing on us. We watched in wonder at the swarms of color, in awe that it takes 3 or 4 generations for these butterfiles to make the round trip from the Great Lakes and Canada here to Mexico and back.

Two hours later, down at the bottom, we saw the woman selling cane walking sticks. "You were right," we said."We needed them." Coming down we saw many climbers who had only made it half way and gave up. We were proud and thrilled to have witnessed this spectacular scene. Angie had the bright idea to ask the stick woman if she would buy our sticks back for half price. She seemed stunned--no one had ever asked her that before--but then agreed and gave us 10 pesos for the two sticks.
Posted by Fotogypsies at 1:28 PM